The good life….enjoying the hot tub with Sienna and Sebastian on Guemes Island West Shore. And, dugout injury, game one of the Little League season. 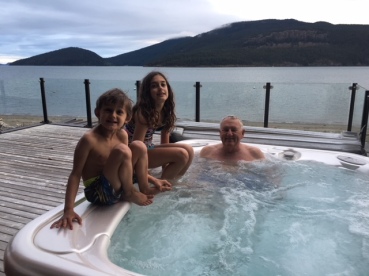 Week #12, can you believe it? We left St. Louis February 8th and tomorrow is the first day of May. This week we have big plans– two Ravens games, golf planned for Wednesday, Sandy will be showing her new friend around Guemes Island that day, Monday we plan to drive up to Mount Baker and then this Saturday we will heading to Seattle for a Sounders vs Crew professional soccer game.

Monday’s drive to Mount Baker was an hour and half of winding roads slowly climbing the foothills through the Evergeens. As we drove on we noted the temperature plummeting from 55 degrees to 40 degrees. When we reached the Mount Baker ski area, which officially closed on April 22nd, we passed eight foot snow drifts with snow covering most of the area, but melting fast.

Thursday night our Ravens Little League team had only eight of twelve players show up for the game. So, we were a little short handed in the outfield when chasing line drives hit by the other team. It’s a good thing the outfield grass wasn’t cut. We held every batter to a looong single. What a game the Ravens played! We had twelve hits in two innings. In the 2nd inning we had eight batters in row hit the ball in fair territory. This is a miracle! The game ended on Ava’s first hit of the season. What an exciting post-game celebration!

Friday we had an enjoyable day babysitting for 4 year-old, Amaya. We spent the entire day on Guemes Island moving from one childhood adventure to the next. Amaya has quite the imagination and she wants Grandma and Grandpa to play along. Then, Saturday morning at 8am we were on the Ferry headed to the dog kennel to leave Mesa Ruby.  After the successful dog drop off we headed to Seattle for the Sounders game. The flag waving, singing crowd and total game ambiance was worth the price of admission. And, it was a good thing too because the Sounders looked awful in a 0-0 tie.